Many universities are now investing in vending machines to provide additional services to students, particularly out of hours and with specific provision in relevant locations.

One of the most striking of these is the bacon vending machine recently installed at Ohio State University which has been sponsored by the Ohio Pork Council (yes, really). The proceeds of the venture are apparently intended to support the university’s meat programme (whatever that is) and it is already so popular that it needs to be restocked four or five times a day.

It must have been a success because hot on its heels it seems Ohio State have decided to add pizza vending.  The ‘Pizza ATM’ looks like it will be a hit as well:

“We are always looking for innovative and new ways to provide services to our students here at Ohio State,” said Abby Hertzfeld, associate director of operations for the Office of Student Life Dining Services.
Here’s how it works: Pizzas are pre-made in a neighbouring kitchen and come with cheese or pepperoni toppings. They are then stored in a refrigeration unit inside the Pizza ATM. More topping options are expected in the future.
When a pizza is ordered, it automatically moves to the ATM’s internal oven and is baked until the crust is crispy and the cheese is melted. It typically takes about three to four minutes. A 10-inch pizza costs $8.
It will eventually serve pizzas around the clock.
“Students love to eat at all times of the day and even at breakfast they can eat pizza. They love pizza,” Hertzfeld said. “We’re starting out right now with our pilot program with limited hours but we’re going to continue to extend hours throughout this semester with our ultimate goal of there being 24-hour access for our students when we get to fall semester of 2019.”

It’s not just food though as this story about one of many US universities demonstrates:

Others too have developed interesting vending offers including for stationery at UEA and Birmingham City University.

Meanwhile, Western Kentucky University installed phone-charging vending machines on campus earlier this year, which dispense one-time use chargers for iPhones and Android phones. Each charger costs US$7.49 plus tax.

But as if that weren’t enough, then there is the next level of provision – mobile vending: 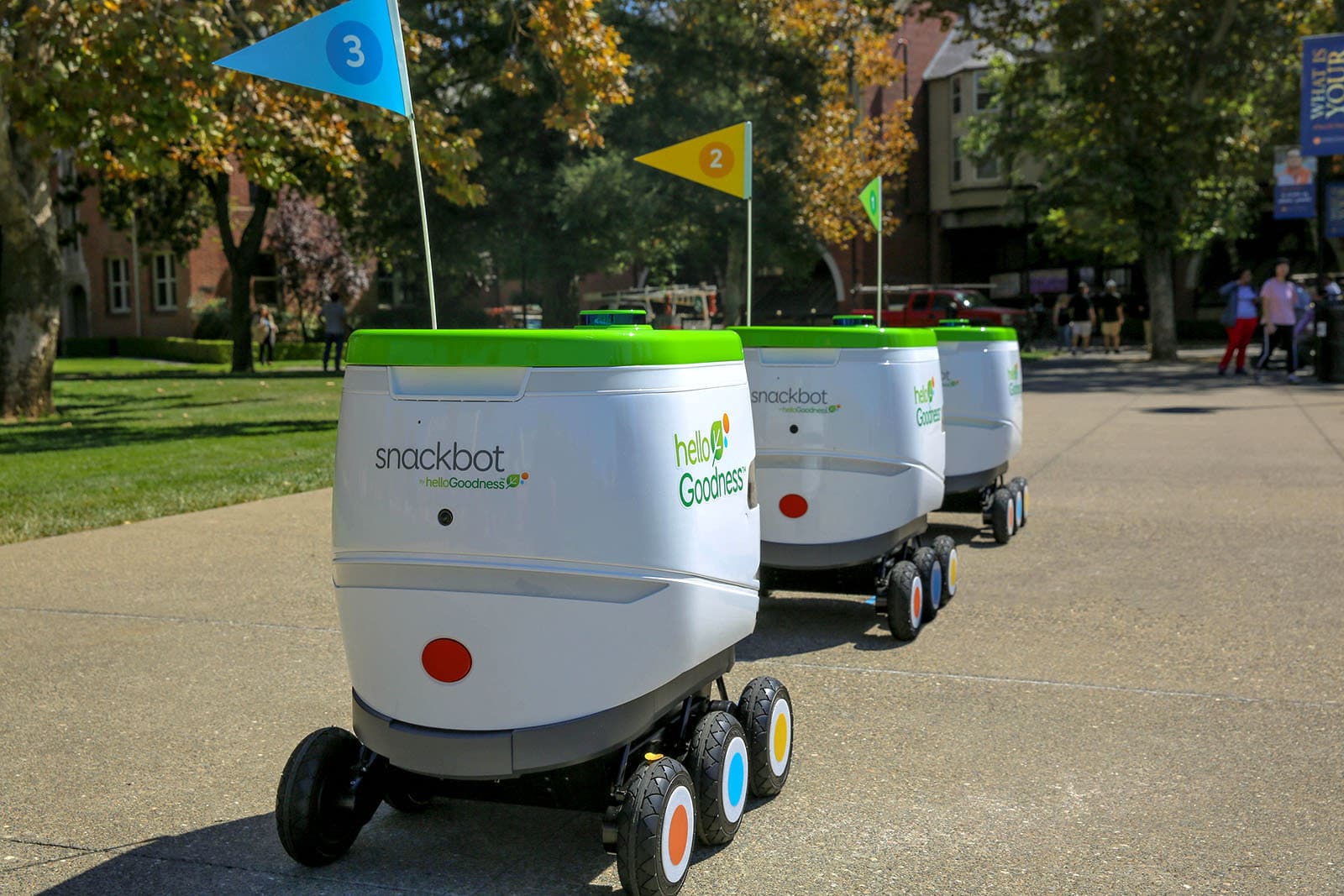 If walking to a regular vending machine seems too inconvenient, what if the vending machine came to you? PepsiCo is doing just that at the University of Pacific campus in Stockton, California with robots called “snackbots”. Using a smartphone app, students can order quasi-healthy snacks like Baked Lays, Sunchips or a Starbucks Cold Brew (from PepsiCo’s “Hello Goodness” vending platform), and have it delivered between 9am and 5 pm to one of 50 locations around the 175 acre campus.

Not to be outdone, George Mason University is introducing a similar range of delivery robots offering critical supplies from pizza to doughnuts:

Starship Technologies has a fleet of 25 mini robots descending upon the George Mason University campus, in Fairfax, Virginia. The bots will deliver food and drinks to the 40,000 students, faculty, and staff. The first retailers to bring hungry college kids supplies are Starbucks, Blaze Pizza, and Dunkin’. The food and beverages come in what looks like a white cooler on six wheels.
The fleet autonomously (naturally) brings food to students and teachers on a campus meal plan run through food services company Sodexo. Students order through an app; within a few minutes, a bot rolls by with a breakfast sandwich and iced coffee. Delivery to anywhere on campus costs $1.99.

Let’s hope we see more of the Snackbots and the like on campus.

Vending machines certainly seem to be taking off. However, there are risks too. As previously noted here HE is a particularly vulnerable area to cyber attacks. A recent story describes a university which was attacked by its own vending machines which were hijacked by hackers and then, along with thousands of other IoT devices, were making seafood-related DNS requests every 15 minutes. Everything from lamp posts to smart light bulbs to drinks machines was involved. No university wants to be taken over by its own vending machines – and what would happen if those Snackbots went rogue?

What other exciting vending machines are out there?

Wonkhe Plus
by Mark Leach
featured_message
10/10/19

2 responses to “The need for speed: university vending machines take off”