Gary Guadagnolo is a senior researcher at EAB.

The Covid-19 crisis continues to unfold, but sector leaders are already anticipating significant financial losses and preparing for a range of challenging budget scenarios.

The most dramatic projection yet comes from the University of Michigan in the US, anticipating up to $1B, or £820M, in losses – although a large chunk can be attributed to lost clinical revenue from the university-owned hospital system. In the UK, estimates seem to hover around 20 per cent of next year’s revenues, with the University of Manchester putting that figure at £270M.

To get a handle on the financial impacts of the pandemic across the sector, EAB surveyed over one hundred senior business and finance leaders from higher education institutions across the United States and Canada. In partnership with the Association of Heads of University Administration (AHUA), we expanded that survey to include responses from 30 UK higher education providers.

We wanted to learn where providers are feeling the most pressure in the short term, the response tactics they are turning to first, and which they are keeping in their back pockets for later. Suffice it to say that redundancies, pay cuts, reorganisations—everything is on the table.

About 65 per cent of UK survey respondents have calculated their emergency pandemic response costs incurred to date. The range of cost estimates was wide, given the diversity of responding institutions. On average, costs represented 2.3 per cent of an institution’s annual operating expenditures. The median cost estimate was £3.1million. To put that in perspective, the average institution would need to enrol more than 335 additional students in the autumn to recoup those costs.

60 per cent of UK survey respondents indicated that student refunds, particularly for accommodation, comprise their largest emergency cost. Notably, this figure was higher amongst North American providers at 86 per cent. There, universities tend to own and manage more on-campus student accommodation; they also quickly responded to political and legal pressure to offer accommodation and other fee reimbursements in the wake of campus closures.

Other noted emergency costs include covering lost research funding and investing in remote teaching and administrative infrastructure. The cost of digitalisation and rapidly shifting to an online provision—particularly where the capabilities did not previously exist—does not come cheaply. Additionally, just over 30 per cent of respondents are also offering or considering hazard pay for critical employees working on campus, most commonly at 1.25x to 1.5x an employee’s hourly rate.

Universities looking wistfully to other countries that did receive direct government support for these costs need not be too envious. Our global round up of government packages for universities and students suggests the US has the most comprehensive package of measures. But even there, the outlook remains gloomy. In the US, nearly three in four finance leaders estimated that the bailout funding would cover less than 45 per cent of emergency costs, and more than a quarter expected it to cover less than 15 per cent of emergency costs.

We asked survey respondents what tactics they have pursued or are considering to raise cash liquidity in the face of one-time, emergency expenditures. The survey was open both before and after the announcement of the UK government’s plan and certainly reflected the (dashed) hope for some financial relief there.

The greater need for cash amongst US providers in particular is not entirely surprising. There, many smaller institutions found themselves on the hook for offering student refunds in amounts much larger than they had in cash on hand. Given high debt loads, structural deficits, and weak/sub-prime credit ratings, they initially had trouble accessing lending mechanisms before federal intervention.

In the UK, on the other hand, the Bank of England’s monetary stimulus measures have largely stabilised public credit markets. It remains to be seen whether the winds change by autumn and the start of a new academic year, with its uncertain enrolment prospects.

Dusting off the standard cost-cutting playbook

More than four in five survey respondents in the UK and North America reported their institutions are updating financial contingency plans or creating them for the first time—a clear indicator of where the sector is heading. Three quarters of respondents (73 per cent) are using revenue losses and/or incremental expenses vs. budget projections to trigger cost containment actions.

In the UK, 60 per cent of institutions have already implemented a first wave of cost-cutting tactics, the most common of which include travel and hiring freezes, the delay of capital projects, a reduction in discretionary spending, and furloughs of administrative staff. In terms of potential levers that may be pulled as the financial situation worsens, the usual suspects are at the ready: a reduction in casual staff, salary freezes, voluntary severance, and adjustments to remuneration. 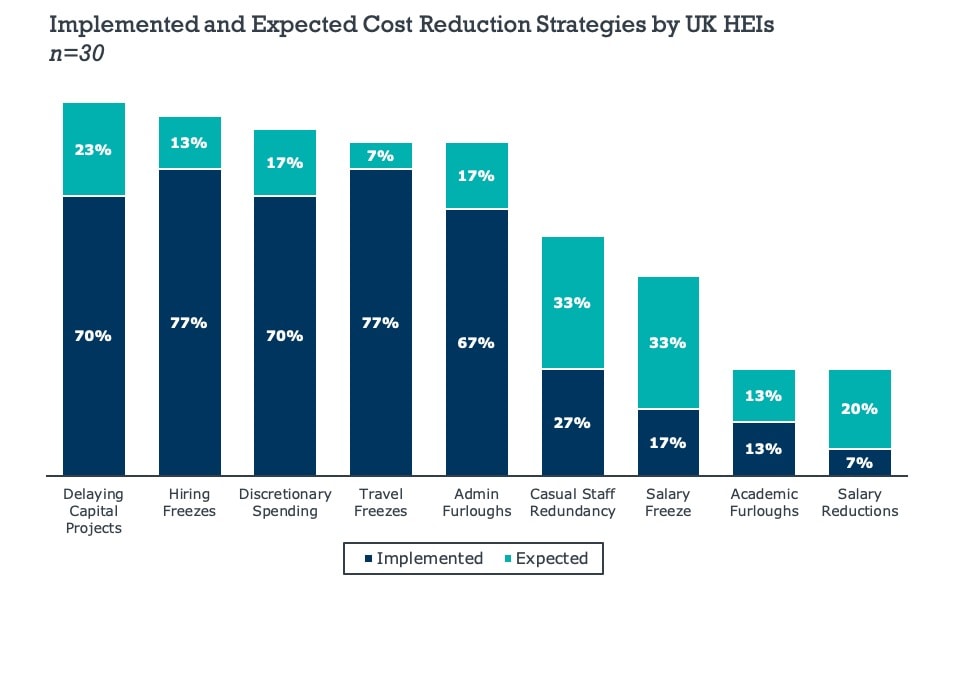 Notably, most institutions are rolling out cuts to executive and senior staff salaries first to minimise reductions elsewhere, and to communicate a “we’re all in this together” message. Australian universities were early movers here, with more than three quarters of senior leaders taking pay cuts, most around 20 per cent and some as high as 30 per cent. A caveat: some institutions have learned the hard way that reducing senior salaries is only effective as a PR move if the reduction taken by executives is greater than what is asked of the rest of university staff.

Finally, in terms of impacts directly on staff—whether redundancies, reduction in hours, or reduction in pay—most UK respondents noted a preference to wait until the autumn term, once the intake of new students and the impact of other cost reduction strategies on the budget becomes clearer.

This article is published in association with EAB. On 3 June from 14.00-15.00 EAB and AHUA will co-host a webinar to discuss the survey findings further. Attendees will hear from Richard Calvert (Deputy Vice Chancellor, Strategy and Operations, Sheffield Hallam University), Mike Shore-Nye (Registrar and Secretary, University of Exeter), and Louise Watson (Chief Financial Officer, University of Greenwich) about their institutions’ responses and financial plans for the autumn. Click here to register and join the conversation.

Dont drop out Don’t Drop Out Side