Kieron Rees is Policy Adviser for skills, schools and apprenticeships at Universities Wales.

Today Universities Wales launches a report looking at the future skills challenges Wales faces, and what role higher education will play in the future prosperity of the Welsh economy.

In recent years, a number of reports have examined the potential impact of automation on the UK workplace and the role of education providers in mitigating the risks of automation. In ‘Solving Future Skills Challenges in Wales’, we set out to examine what this means for people in Wales.

Excluding potential migration, Wales’ demography alone presents challenges in this area. On the whole, our population is older and less well-qualified than the populations of England and Scotland. As well as being a ‘net importer’ of older people, the 18-year-old demographic dip is particularly pronounced in Wales. By 2020 the UK population of 18 year olds is projected to have decreased by 9.7% compared to the peak in 2015. In Wales, however, this decrease is projected to be 14.8%.

This also means there will be a reduction in the number of people aged 20-29 entering the workforce in Wales in the next seven years, and the 20-24 year-old cohort will only begin to increase in 2026. 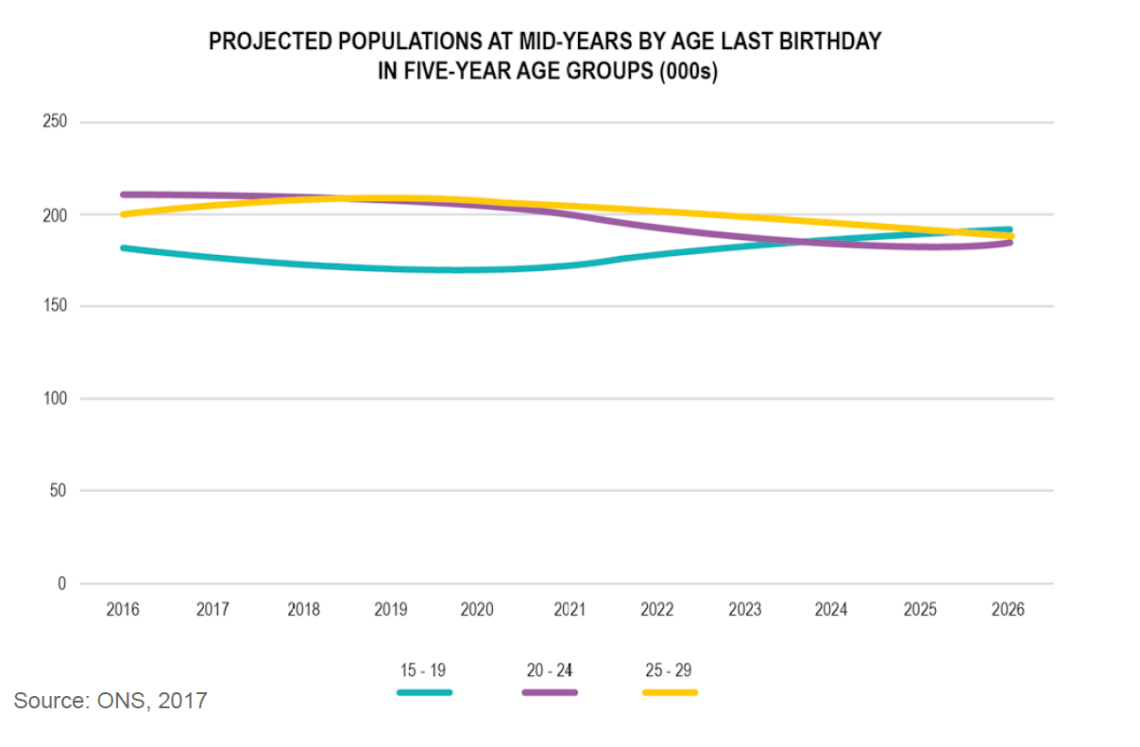 Attack of the robots

In addition, the Welsh economy continues to have low productivity and high levels of employment in sectors considered at risk of occupation shrinkage. Three of the sectors deemed most ‘at risk are manufacturing, transport, and public administration. These sectors alone account for a fifth of the Welsh workforce.

While most now predict that the number of jobs created by automation will balance out those lost, the risk for Wales and its current skills and economic make-up is that those jobs will be created elsewhere in the UK.

Much of the literature on automation reflects on the importance of higher level skills in preparing countries to make the most of the challenges and opportunities posed by automation. PricewaterhouseCoopers estimates that occupations held by those with low levels of education (level 2 or lower) have a much higher risk of automation (44%) than those held by people with a level 6 qualification or above (11%).

A recent report from the OECD concluded that the extent to which individuals, firms and economies can harness the benefits of automation is critically dependent on the readiness of countries’ adult learning systems to help people develop skills throughout their working life. The report also found that adults with low-level skills are three times less likely to participate in training than those with high-level skills.

As such, adult learning and flexible learning will be important tools in preparing Wales for future workplace changes. Like much of the UK, the number of people accessing part-time higher education has declined over the past decade in Wales. Between 2007/08 and 2017/18, the number of people studying part-time higher education in Wales decreased from 53,575 to 32,810. Addressing this decline, and the participation of people from Wales in postgraduate study, was one of the aims of Ian Diamond’s review of student support arrangements and higher education funding in Wales.

Much has been written about the reforms being delivered in Wales as a result of the Diamond Review, which include an enhanced package of maintenance and fee support for part-time and postgraduate students. Early indications are that these reforms are working with the SLC and report a 35% increase in the number of part-time students receiving support and a 58% increase in the number of awards of postgraduate student support.

These increases are supported by figures from the Open University in Wales which show a 49% increase in undergraduate students on 1 October 2018 compared to 1 October 2017. This included a 56% increase in students from low participation areas. Given the impact that the Diamond reforms are having, ensuring these reforms continue to be delivered will be essential in helping deliver higher education to a wider group of people.

Degree apprenticeships are currently being piloted in Wales but only at level 6 in digital and advanced manufacturing / engineering. Expanding the number of subjects available for degree apprenticeships, and introducing level 7, would help those already in the workplace to gain graduate-level skills and promote progression from existing higher level apprenticeships onto degree level.

And our work also found flexibility will be an important factor in ensuring that more people of all ages are able to access higher education. A recent report by Universities UK found that part-time students cited a lack of flexibility (33%) as the main reason for not completing their course.

The economic and demographic make-up of Wales means that automation presents a particularly challenging problem for policymakers in Wales. This report is intended to be a contribution to a larger debate in Wales on what, as a country, we need to do to mitigate the risks of technological change and capture the opportunities offered. A fundamental part of this will mean supporting more people, of all ages and backgrounds, to access higher education in a way that works for them.

Wonkhe Plus
by Mark Leach
featured_message
10/10/19